It all started when a herring meal factory was established on the premises in the 1950s, due to enormous deposits of herring at the time.

The plant was located near the main spawning area for Norwegian Spring Spawning Herring. A large fleet ran the winter fishing for herring on the northwest coast of Norway, at first with drift nets, and later with purse seines. Landing plants for herring were built in almost every harbour to preserve the fish.

Vikomar AS was established in 1990 in the old production facilities from the golden age, where the previous owners had kept operations going through shifting times. Since the startup we have developed the company to be among the largest and most modern pelagic fish processors in Norway. This is a continuous process.

Brødrene Sperre AS became main shareholder of the company in 2012. Brødrene Sperre is a leading producer of frozen pelagic fish, frozen whitefish, and salted and dried fish. Vikomar and Brødrene Sperre create a strong alliance between two successful companies. Together we are among the leading suppliers of Norwegian wild caught fish. 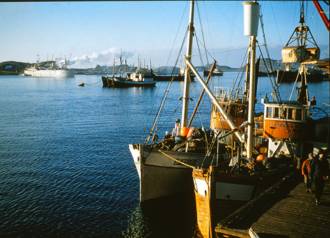 1951: Romsdal Sildoljefabrikk is established with a share capital of 1, 082, 600 NOK and 1100 share holders. The share holders were mainly fishermen and businesses associated with the fishing industry.

The company’s objective was to refine and to sell herring. The background was the herring which was caught in abundance on “Buagrunnen”, no more than an hour trip from the plant.

1954: Administration building with a canteen is built.

1967: Construction of a processing plant is completed. This is the same building from which Vikomar runs its business today.

1974-75: The factory is expanded with 2 freezing tunnels, 2 larger freezing storage rooms and an ice plant.

1979: A new and modern fishmeal factory is built which purify discharge and emissions. The neighbouring areas are no longer affected by the smell which previously meant that the factory was active.

1987: A new low-temperature fishmeal production line is installed, and the silo capacity is expanded. The fishmeal silos, which were distinguishing land marks until they were demolished in 1992, were constructed.

1990: Finn Viken in Vikenco in Aukra leases the plant from Romsdal Havprodukter in June to start freezing mackerel for the Japanese market. Vikomar is started, registered October 3rd 1990.

The first delivery of mackerel came from Tojako, a boat from Averøy on July 20th 1990. In the 1990 season, 3000 tons mackerel was packed and sold to Japanese customers by the company Nils Sperre as from Ellingsøy.

1995: Vikenco is sold to the company Aukra Seafood. The new owner makes major investments in Vikomar’s production equipment. New sorting facilities and automatic scales were installed. The production changed from freezing in 25 kg plastic boxes for repacking in carton boxes, to freezing directly in 20 kg carton boxes. The freezer capacity was also expanded.

1997: The closed herring meal factory, which had been closed since 1990, was rebuilt into a freezing facility.

2000: Vikomar is now owned by Pan Fish ASA, and is rapidly expanding. Beginning construction of 2 extra freezing tunnels and facilities for palletezing and packing line automation.

2001: Pan Fish buys Global Fish, which consists of 4 other pelagic plants and forms the company Pan Pelagic asa. Vikomar is included in this company, and the name is changed to Global Vikomar.

2003: After a quick “up” for Pan Fish comes an even faster “down”. Pan Pelagic is split up, and Vikomar is again owned 100% by Panfish. Unfortunately, the processing plant is closed and the owner is in a deep financial crisis.

2004: Kristofer Reiten, Per Olav Mevold and Norsk Sjømat as buys Vikomar from Pan Fish together with Per Sandøy and Gjensidige Nordmøre og Romsdal.

Production from the reopening in 2004 in metric tons:

2005:  Investments: 3 new herring filleting machines, which are installed on the first floor

2007: Total reconstruction of the cold storage rooms, turning them into a modern and automated freezing plant.

2009: Another 3 more filleting machines are bought. A new production line is installed on the ground floor. White fish processing is closed, since there are no fresh fish trawlers in activity any more.

The anniversary is celebrated together with Norwegian and Lithuanian workers in Palanga, Lithuania.